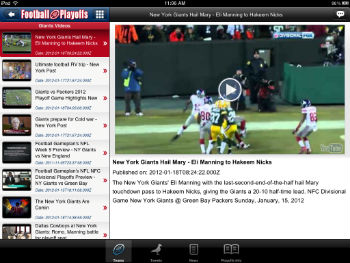 The Football Playoffs 2011-2012 App includes information for every team participating in the current postseason. Features include team rosters, player twitter feeds, and access to youtube videos showcasing highlights and interviews. The app, which organizes playoff teams by conference, updates the playoff season to show which teams are eliminated from contention and those still remaining in the hunt for Super Bowl XLVI.

The team-specific iPhone and iPad apps provide fans with instant access to news and highlights from ten of the most popular teams in the NFL. Each app features complete team information -- including game schedules, staff bios, and a history of the team and stadium. The mobile apps also offer full roster information, complete with biographies and access to player twitter feeds. News, tweets, and videos from official team sites and blogs round out the host of useful features for AppBurst's NFL mobile apps.