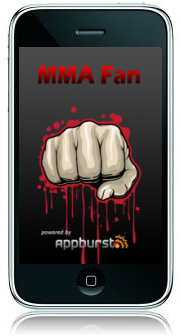 AppBurst, an iPhone application development company, today announced a promotional contest to develop a FREE iPhone app for ten companies, organizations, or individuals.  AppBurst will be accepting applicants for the contest from February 24, 2010 until March 30, 2010.   AppBurst iPhone development has announced that the “UFC Fan” iPhone app has officially been renamed to “MMA Fan”.  The company renamed the app to be more relevant being that the application will now contain information, news, and videos relevant not only to the UFC, but to the entire mixed martial arts industry.  The new and improved version of the app will now include info to follow all of the elite MMA organizations including the UFC, WEC, Pride, Strikeforce, Pro Elite, Affliction,  PFC, and others.

Commenting on the MMA Fan iPhone application, AppBurst co-founder Mike Haldas says: “Our goal is to create the best source of information for the MMA industry through a single and FREE iPhone app.  As along time fan of the UFC and MMA, I wanted an app that I could check from my iPhone to keep up to date on the latest news from the UFC, PRIDE, WEC and also read what my favorite fighters were talking about.  We have just started on this app.  There will be many improvements coming and we encourage users of the app to contact us with suggestions.  We are also looking for partners such as media companies, MMA fighter agents, promoters, MMA fighters and other people in the industry to partner with us so that we can provide their content through our app.  We are also looking for MMA fighters that would like to promote themselves though their own iPhone app.”