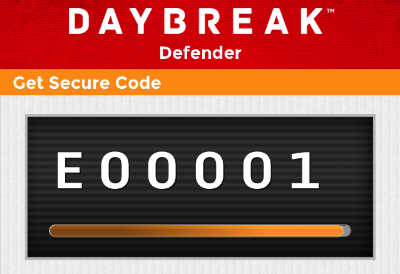 AppBurst recently developed and released the Daybreak Defender Mobile App for Daybreak Games Company. The Daybreak Defender Mobile App offers a two-step authentication method for Daybreak Games account access—similar to what is found in banking and email services—to provide a one-time PIN to use in conjunction with the account owner’s regular password. The feature provides an additional layer of security for account information.

The Daybreak Defender Mobile App is available for anyone with a Daybreak Games account used to play titles developed by Daybreak Games. Once the mobile app and games account are linked, the former is required at all times to access the latter; users will be required to supply the mobile app-generated PIN for all account logins. The AppBurst-developed mobile app gives users a simple three menu selection with the initial setup to link accounts, the code generator for each login, and a help area with frequently asked questions.

Two-Factor Authentication requires two different pieces of information from users to authenticate access. More traditional uses of this authentication involve a banking ATM card and personal PIN number; even if an ATM is stolen or compromised, unauthorized users will be unable to access account information without the PIN number. A more modern and purely digital example of two-factor authentication is Gmail and other email providers requiring users to enter a PIN number sent to a mobile device—in conjunction with the account’s username and password—to access the account from unrecognized computers.

AppBurst's development team can create and implement two-factor authentication or other custom features for companies and organizations in a variety of industries. Learn more about the AppBurst Experience.

The AppBurst-developed feature, first used in the Daybreak Defender Mobile App, works in a similar fashion and requires Daybreak Game account holders to enter the generated PIN number from the mobile app when logging into their account on a personal computer. The  PIN number, or authentication code, is a six-digit numeric and unique code only valid for one instance. The process greatly protects account holders from malicious attacks or possible threats to account information and may be developed for similar uses in a variety of industries.

For more information on two-factor authentication and to speak with an AppBurst representative: