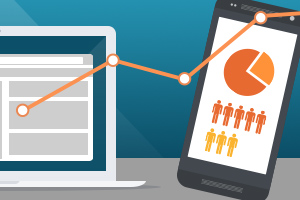 ComScore’s comprehensive “U.S. Digital Future in Focus” study for 2014 showcases a range of significant data. The findings, largely consisting of mobile application usage data, paint a telling picture—one of an increasingly mobile country not only prioritizing mobile apps to traditional desktop experiences, but also native apps to mobile browsers. Read below for more details on the most significant findings related to mobile development and the importance of providing an app for any company or organization.

Multi-platform users, by definition, are people who use both desktop and mobile devices. As 56% of people now own either a laptop or desktop computer and a mobile device, the need to provide an audience with multiple options to view content is increasingly important. An important note regarding ComScore’s data is the fact mobile usage has been predominantly incremental to desktop--in other words, nearly all growth related to internet usage in the past three years is on smartphones and tablets.

From late 2010 to December 2013, smartphone engagement has grown 300% -- from approximately 131-billion total minutes to 442-billion minutes, while tablets experienced a 1000% increase in usage to 124-billion minutes per month. The two devices alone account for over half of audience’s digital engagement and “are responsible for doubling the amount of time Americans spend online.”

Mobile apps “accounted for 85-percent of internet time spent on phones in 2013.” Consider the amount of time an average person picks up their phone during a given day to put the figure in perspective. On a person’s body virtually 24/7, smartphones are primarily used to engage in mobile app activity--as well as texting and phone calls. Simply providing a mobile website is no longer enough to maximize an audience’s engagement and reach the largest number of users around the world.

Social Media Usage and Monetization is Predominantly Tied to Mobile

Users spend 68% and 86% of their time engaging in social media giants Facebook and Twitter via a mobile device, respectively. Mobile advertising also accounts for 53% of revenue on Facebook and 75% on Twitter--ultimately proving both are mobile-first businesses. Specifically, native advertising--from promoted Tweets to Facebook’s sponsored stories--are directly tied to the surge in mobile device usage and is “critical for effectively delivering advertising.”

Across the rest of the social media landscape, Instagram and Vine enjoy a near monopoly on mobile, while many other recently successful startups such as Snapchat are 100% mobile. The only significant social media platforms to score more than half of their engagement via desktop are blogging tool Tumblr (46% mobile) and professional networking site LinkedIn (26% mobile).

YouTube currently reaches 84% of viewing audiences online, making integration in a native app a must-have feature for anyone providing a mobile app to end users. Video viewers in the United States are also watching 38% and 54% more videos on smartphones and tablets since December 2012, respectively. As users continue “watching content wherever and whenever is most convenient for them”, paying for television and print ads no longer suffices for a company or organization hoping to reach the greatest number of people.

For more information on mobile app development and to speak with an AppBurst representative: